Music lessons to create memories that last a lifetime 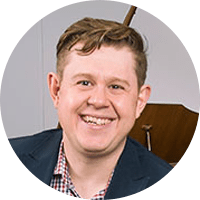 Jan Janovsky is a dynamic musician and the owner of Classic Studios. His talent is being able to bring out the talent and unique voices of students. Consider him the piano whisperer.

His students get into music Universities from University of Toronto to University of Leeds and generally into the courses of their choosing.

Jan teaches improv, compostion, elite and group lessons. Lessons are by audition only, space is limited.

Jan holds a Master’s in Music in Jazz studies. To read more : www.janjanovsky.com

Eric has taught private trumpet and beginner piano lessons for around 20 years. Trumpet students have included casual and semi-pro adult students, casual school-aged students, school aged-students who have been selected for national honor bands, as well as young beginner students. His piano students have included young children from age three up to adult beginners as well as family lessons where parents and children learn together. Eric has taught many school clinics for jr. and sr. high students. Also, Eric completed a Masters in Arts Education at SFU, and taught middle school students at a Montessori school for five years.

Sign Up for lessons with Eric
Justin P. - Piano 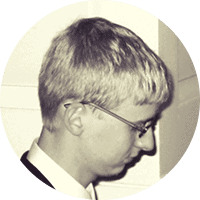 Justin was drawn to music at a young age, returning to the piano when he was 13 years old. In the short time he’s been back on the keys, Justin has proven his skill, talent and passion for piano.  He has just begun his Bachelor of Music at the University of Alberta.

The variety and creativity of music is what Justin tries to embrace. He hopes to teach and be a composer as he moves forward, in addition to expanding and adapting his teaching style. By embracing the tastes of the student, Justin hopes to engage the students interest to ensure their success.

Justin provides a inviting and fun atmosphere for his students. He focuses on the expression of the student, which is the key to musical success. If you’re considering learning piano, Justin is a wonderful and warm addition at Classic Studios for in-your-home piano lessons.

Sign Up for lessons with Justin
Burke M. - Drums 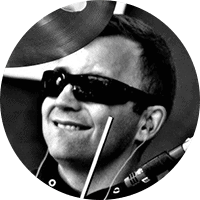 Burke has been studying music since his junior high days when he began classical guitar and clarinet in band. He started drums in the high school jazz ensemble and hasn’t looked back, continuing his musical studies at Vancouver Island University and Grant MacEwan University as well as private instruction from some of North America’s finest drummers.

Burke’s goal is to inspire students to feel that rhythm is in us and around us. It is important to teach each student the basic understanding of rudiments, notation and groove and how they relate to each other based on songs they enjoy and want to learn.

We are thrilled that Burke is offering in your home drum lessons!

Sign Up for lessons with Burke
Rebecca C. - Piano 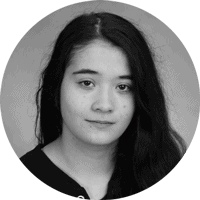 Rebecca has been playing piano since the age of seven and grew up in a house always filled with music. She is about to enter the third year of her Bachelor of Fine Arts in Theatre Design at the University of Alberta.

She continues to pursue music in addition to her university studies, and finds that the two
fields compliment each other well. She hopes to continue to explore how performance, music, and design are interrelated and uses music as inspiration for her theatre practice and vice versa. Rebecca enjoys playing music in a variety of styles, with a particular soft spot for classic rock. She has dabbled with playing in a variety of groups in the past and sporadically plays baritone sax.

Rebecca is a newcomer to teaching, and is looking forward to helping students develop their passion for music.

Sign Up for lessons with Rebecca
Mark M. - Guitar 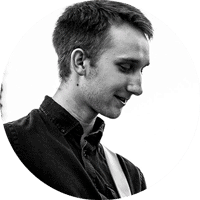 Mark fell in love with guitar in junior high and never looked back. Originally a piano and trumpet player, he never felt at home in music until he began studying famous guitar players like BB King, Wes Montgomery and John Mayer. He has just finished his Performance Diploma at MacEwan University, and is currently working on a second diploma in recording, also at MacEwan.

Mark has a passion for making people feel the same joy he feels when he plays the guitar. He teaches music by teaching songs and exploring music theory, ear training and playing techniques along the way. His focus is on helping his students reach their musical goals, whatever they may be.

Mark is proud to offer guitar lessons at any level in your home through Classic Studios! 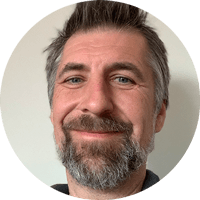 In 2014 he started reigniting his love for the guitar as well as learning about bottleneck style playing. He added the banjo a couple years later. Since 2018, he has released three albums and over 10 singles under his roots music brand Thom as Fred, which can be found on Bandcamp as well as all streaming platforms. 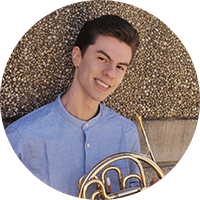 Michael Nunes is a Canadian composer and horn player from Sherwood Park, Alberta. He is committed to a holistic approach to music, working as a performer, composer, arranger, engraver, and educator with organizations across North America. In 2022, he completed his Bachelor of Music in Composition at the University of Toronto, studying composition with Gary Kulesha, James Rolfe, and Larysa Kuzmenko, and horn with Gabriel Radford and Nicholas Hartman. Previous teachers include Kevin Rivard, Allan Gilliland, and Allene Hackleman.

As a soloist, Michael has performed Strauss’ Horn Concerto No. 1 with the Abreu Chamber Orchestra and his own arrangement of Bozza’s En Forêt with the Hannaford Street Silver Band alongside Jens Lindemann. Michael has performed in festivals such as the Aspen Music Festival, the Brott Music Festival, the Vancouver Symphony Orchestral Institute, and under conductors such as Marin Alsop, Jane Glover, and Patrick Summers.

As a composer, arranger, and engraver, Michael has collaborated with organizations including the Edmonton Symphony Orchestra, the Hannaford Street Silver Band, and the National Academy Orchestra of Canada. In 2019 he co-founded Green Room Sound Collective, a collective dedicated to providing professional cross-discipline experiences to early-career artists. Michael has composed for, conducted, and commissioned works for Green Room Sound Collective including an audio-visual virtual art gallery, various choral works, and his own chamber opera Union.

Michael is currently pursuing a Master of Music with a double major in horn and composition at the Mannes School of Music, studying with Erik Ralske and Lowell Liebermann. He works as a substitute horn player with the New World Symphony. Michael is a member of SOCAN and the Canadian League of Composers 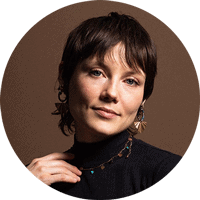 Piano was one of the first instruments that inspired Racquel. She quickly became one of the top performers, placing first and second in performances such as at the Sherwood Park Music Festival, as well as performing as a finalist. Racquel also enjoyed playing the alto saxophone in the honors’ jazz and marching bands and competing in DisneyLand.

After studying Earth and Ocean Sciences at the University of Victoria, Racquel started right back where she left off in music, adding singing to her repertoire. She is currently focusing on completing the RCM program, while expanding her passions in jazz, pop, and experimenting with music in general.

With experience teaching people of all ages, Racquel has found she values building confidence and giving her students musical freedom, while laying down the fundamental building blocks to becoming an exceptional musician.

Sign Up for lessons with Racquel
Kurt S. - Piano & Clarinet 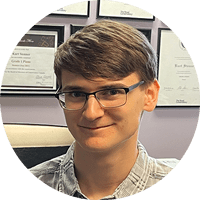 Kurt Stenner is an aspiring composer and musician from Sherwood Park, Alberta. He started learning piano at the young age of four and his desire to learn more has never stopped growing.  This desire to learn more goes hand-in-hand with how Kurt teaches. He understands the importance of good music education and wishes to assist all of his students in achieving their musical goals whether that be preparing for music exams or just playing an instrument for fun.

Kurt is currently furthering his own knowledge at the University of Alberta as he is working towards a Bachelor of Music, majoring in Composition and Sonic Arts. In addition to piano, Kurt has also been developing his skills with the clarinet since junior high and has studied with the University of Alberta’s Symphonic Wind Ensemble and its Experimental Improv Ensemble.

Sign Up for lessons with Kurt
Justin S. - Guitar 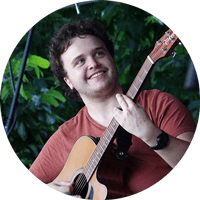 Justin has been playing guitar from a young age and has since expanded his love and knowledge for music. While he has experience playing a multitude of styles, he focuses primarily on folk and country music, finding inspiration from artists such as Tony Rice, Brent Mason, and Chris Thile. Not only does he play guitar, but he also has experience playing bass and ukulele and most recently found interest in the banjo.

Currently, Justin plays in a folk/bluegrass duo performing around Edmonton at festivals like Folk Fest, K-Days, and Heritage Fest. In 2022 he graduated from MacEwan University with a bachelor’s degree in Jazz and Contemporary Music in Performance.

Having experience teaching in prior years, Justin finds joy in aiding students learn new abilities and expanding on their interests in music. He hopes to create an enjoyable atmosphere which encompasses the interests of his students. 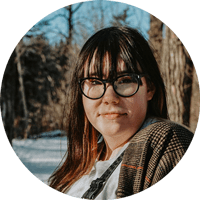 Caylie first fell in love with music in kindergarten and has been singing, playing, writing and recording ever since. She started as a flute player but found that she enjoyed piano, guitar and ukulele much better because they’re much easier to sing along with. Her passion for music has driven her through extensive training in a variety of fields and musical genres.

Caylie is currently in her fourth year at MacEwan University with a major in Recording and Production. When she isn’t teaching she’s in the studio, at a rehearsal or performing as a solo artist or with her band, Waffelhouse.

Caylie teaches voice, piano, guitar, ukulele and songwriting. Over the course of her lessons she also touches on theory and ear training. Her favourite part about teaching is watching her students fall in love with music the same way she did!

Classic studios has been amazing for our child. She has progressed greatly and has been provided with many opportunities throughout the years. She started as a beginner and in the last 3 years has now improved to platinum status at SP Music Festival under Jan’s teaching. She is now a more confident piano player thanks to Jan.

Having lessons in our home is a dream. I’ve been wanting them to try lessons for a while, but the thought of adding another thing to their schedule stressed me out. Having the lessons in our home is so enjoyable, and the kids don’t feel like they are always on the go. It’s such a joy to listen to them learning with Sam. I’m beyond pleased!

Jan is an incredibly gifted pianist with a crazy passion for instilling his love of music into his students! He really believes in his students and works with each unique personality at their level. We have two very different sons taking lessons and his way of inspiring both is entirely suited to the way encouragement would work for each personality.